The aesthetic impression of the monuments from the age of the Revolution bypasses the previous Soviet manners and takes the form of works of art. This is how numerous authentic monuments were created throughout the SFRY, including Sabolic's fists on Bubanj, a symbol of resistance to authoritarianism, which inspired numerous movements in the post-Soviet republics.
Bubanj Memorial Park, Niš, Serbia
Directions

Fists in Bubanj – the defiance to the enemy

On the southwestern part of Niš, in a beautiful park that covers the entire hill, is the largest memorial park dedicated to the Second World War in this part of Serbia, Bubanj, known for its dominant composition of three concrete clenched fists. The entire park complex is arranged with a trail for about half a kilometer long. Apart from being one of the most authentic memorial complexes in the region, Bubanj Park represents also the „lungs“ of the city of Niš, a favorite picnic spot and a kind of nature reserve. Apart from the distinct message of the composition of the monument, the symbolism of the former execution site is that today it is the richest habitat of birds, a symbol of freedom, in the wider area of ​​the city.

The monument was built on a hill where from February 1942 to September 1944, over 10,000 detainees from the Red Cross camp were killed, and most of them were citizens of  Niš and southern Serbia. The place was originally marked by a memorial pyramid in 1950, and in 1963 an imposing memorial park was built and a forest has been planted. The opening ceremony of the park was organized for the Liberation Day, and the composition itself is the work of the Croatian sculptor Ivan Sabolić.

“Fists in Bubanj” – the defiance to the enemy

The dominant composition of the Bubanj Memorial Park are three imposing clenched fists of different sizes. The composition represents men's, women's and children's fists as a depiction of the suffering of entire families. Prominent and deliberately lonely at the top of the hill, this composition gained in importance when one bears in mind that the clenched fist is a universal symbol of resistance and defiance to the enemy and injustice. In addition to clenched fists, the Bubanj Memorial Park also consists of a composition of five elements, which modernistically depicts scenes of machines for killing, shooting, rebellion of the people, capitulation of conquerors and victory. The sentence "They shot us, but they never killed us, never subdued us", engraved in the monument, is a homage to the memory of all the innocent victims, and a reminder that their sacrifice was not in vain and that the idea they kept and fought for was brought freedom.

The Red Cross concentration camp was the largest war camp in this part of Serbia. Initially intended for prisoners of war of the Army of the Kingdom of Yugoslavia, it was soon turned into a concentration camp for Jews, former officers and prominent Yugoslav politicians, communists and other members of the resistance. The camp was named after the nearby Red Cross train station. It was founded by the Gestapo, and throughout its existence it was commanded by the SS. The camp is known because it represents the first execution site in which the first breakthrough was organized, that is, the escape in occupied Europe, on February 12, 1942. In the museum of the former camp today we see a place where the detainees were tortured, solitary confinement with barbed wire instead of a bed was preserved or reconstructed.

Roma culture and the artistic point of view

Take the February 12 Boulevard and go through Stočni trg, the largest Roma settlement in Niš, which originated in the old Jewish cemetery, through muddy alleys, sung and shown in the film of the famous Goran Paskaljević and Ljubiša Samardžić called "Guardian Angel". Roma and their music are an unavoidable part of the Niš soundtrack, especially the voice of Šaban Bajramovic, whose heritage and bohemian style we gladly accept.

From oriental to modern Niš

The people of Niš are proud to point out that their city is at the crossroads of important roads, that it is a junction of east and west, but also that their "house is in the middle of the road" and hence so much suffering and suffering throughout history. Various conquerors stayed shorter or longer in this place. Niš and its surroundings is the place where several Roman and Byzantine emperors were born, including one of the greatest, Constantine. As it is located at the crossroads, it is not surprising that the Crusaders passed here, so on one occasion the first Serbian king Stefan Nemanja and the emperor of the Holy Roman Empire, Friedrich Barbarossa, met there. Niš was ruled by Romans, Byzantines, Bulgarians, Serbs and Ottomans. The city was the center of the region even during the Ottomans. Apart from the mighty fortress, in that period the city had a distinct taste of an oriental trading town, with narrow streets (alleys) in which rich craftsmen and merchants lived in their houses. During the day, the city smelled of coffee and tobacco, and in the evening of flowers from the gardens of houses. After the liberation from the Ottomans and joining the Principality of Serbia in 1878, the city got a more European look, following the example of the settlements of the Austro-Hungarian Empire. Today's Niš is developing on the foundations created between the First and Second World Wars. During this period, streets and squares were built, with features of late neoclassicism but also modernism. In the past, you could see a tram rattling to Niška Banja, and today, passing Voždova Street, the former Pirot Road, you can see the Janković Palace, with the National Theater, whose acoustics are designed on the model of the Milan Scale. Dragiša Cvetković, a reformer and modernizer, also came from Niš, who built social houses and apartments on the hills around Niš, which can still be seen in all their functionality, although damaged. Most of the people of Niš have forgotten their fellow citizen, although even today his villa and garden are one of the most beautiful decorations of Niška Banja.

From the collapsed bridge to the Icarus Monument

The most famous symbol of Niš is the Niš Fortress, an Ottoman fortress built on the remains of an ancient and medieval fortress. It is believed that the first stone fortification was built in the 2nd century AD, when the entire Roman korhot (division) was housed here. It is believed that Emperor Constantine was born in it. As many conquerors passed through this area, in almost 2 millennia, the Niš Fortress also changed its owner several times. What has remained constant is that it was an extremely important property for every conqueror, which every attacker will find difficult to conquer.

The modern history of the "Niš Fortress" dates back to the 18th century, when the Ottomans, after the fall of Belgrade by the Austrians, had to withdraw their main military garrisons to the south. The ramparts of today's Fortress were built from February 1719 to June 1723. It is considered to be one of the best preserved fortresses from that period in the Balkans today. Although the entire city was inside the walls, only a few buildings have been preserved today, among them the Bali Beg Mosque. Today, there are galleries and studios, and the whole fortress is an interesting park in the very center of the city, where many generations have experienced romantic love experiences. The famous festivals Film Encounters, Choir Festivals and the increasingly popular Nishville Jazz Festival are also held in the fortress.

Niš gastronomic scene is both traditional and modernized. About twenty years ago, the barbecue was famous, but with all the knowledge and skills of the caterer, it has become a bit monotonous to always eat “ćevap”, meat, meat cubes and onion on skewer (Serbian traditional dishes). About ten years ago, the owners of the tavern realized that the tradition should be rebranded, so they introduced beef tails, sheep fritters, fried peppers stuffed with cheese, “trljanica” salad and other ancient delicacies into the menus. You will hardly be disappointed when you have lunch in any of restaurants in Niš. Even the famous “American” on the hill near Niš, where Richard Burton and Elizabeth Taylor used to have a good time at the peak of their Hollywood fame, is re-opened. Organization of this event was sponsored by Marshal Tito because the Montenegrin director Bulajić convinced him to hire Barton to present him in the film “Battle on the Neretva”, and the married couple came to the local acting festival.

The famous Hotel Ambassador, was also renovated. However, who wants to get better acquainted with authentic Niš specialties should visit “Dva fenjera” in the unattractive part of the city around the market or go to “Zvrk” in the main Voždova Street, especially in the summer because the restaurant has a beautiful garden under linden trees and excellent Moravian salads and bread baked with allspice. No one knows why this specialty is called "Albanian salad". If you want to hear a good music, there is “Nišlijska mehana” restaurant, and restaurant “Stara Srbija”. “Galija”, after which the famous rock band from Niš got its name, does not have a garden either, but it has an excellent liver in scram, just like the tavern “Kod Rajka” in the popular street named Kazandžijsko sokače. 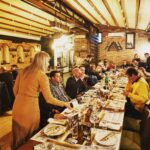 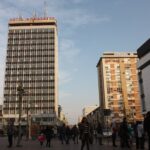 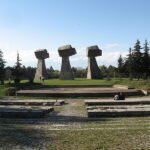 From the collapsed bridge to the Icarus Monument
Location: Bubanj Memorial Park 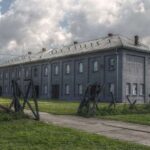 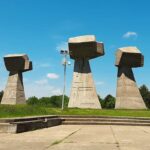