From the Forest Goddess, the central figure of the monumental complex on the hill Hisar, there is the most beautiful panoramic view from which Leskovac and the Leskovac valley can be seen as in the palm of a hand...
Forest Goddess, Leskovac, Serbia
Directions

Leskovac forest goddess - a hidden gem of the South

The job of building the monument complex was entrusted to a man who has already become famous for building similar monuments throughout Yugoslavia, to the world-renowned architect, Bogdan Bogdanović. The memorial park was realized in the characteristic mythological-symbolic expression of Bogdanović. The monument was opened in 1971 by Petar Stambolić, and the recital featured famous Yugoslav actresses with a suggestive and loud voice: Marija Crnobori and Mira Stupica.

The Forest Goddess of Leskovac – hidden gem of the south

The central figure of this composition is a cenotaph called "Goddess of Victory" or, in Bogdanović's words, "Forest Goddess". The monument ends with spirals that symbolize the crown, thus giving a "royal" honor to all the victims. Before reaching the 12-meter-high cenotaph, we passed through a wooden gate, made reminiscent of old Serbian folk architecture, so the visitor may think that the host is waiting for him at the entrance with bread and salt and golden-yellow „rakija“ in a cup or glasses the size of thimble. However, tombstones are waiting for him along the way, a total of 34 of them, and 14 of them bear the names of national heroes and important revolutionaries, as well as 17 fallen fighters buried in the Memorial Park.

At the foot of the cenotaph, there is already an amphitheater integrated into the surroundings. The tombstones contain spirals, ancient symbols of the renewal of life, which are most reminiscent of branches of ferns, a symbol of Proto-Slavic and pre-Christian mythology of eternal life. An inscription on one of the tombstones speaks of this ageless and immaterial idea: "We are dead, but we have not fallen asleep, the stone is looking at you with our eyes."

The talent, connection, cooperation and the suffering of two nations, Serbs and Jews, intertwine in this area. This is evidenced by the lapidary built of rare preserved and broken Jewish tombstones. We should not miss the monument to the fallen Roma, which is also the work of the unique Bogdan Bogdanović. This important monument, whose significance for the tourist offer the people of Leskovac are almost unaware of, was proclaimed in a BBC documentary as an architectural marvel of sacral architecture. Unfortunately, at the beginning of the nineties, someone cut metal "earrings" from the spirals of cenotaphs. However, even damaged in this way, the monument reveals a great aesthetic and monumental value, significant in the regional and world context, just like its many times awarded, and insufficiently understood author Bogdan Bogdanović.

Hisar Hill - home of many myths and legends

The famous Hisar hill is the site of terrible crimes committed in World War II, where more than 1,000 people were killed, mostly Roma, Serbs and Jews. However, mystery and legends, and not just suffering, are related to the hill of Hisar. At the beginning of the 21st century, mysterious objects were found, and the most famous is the "Turović needle", 64.5 centimeters long, made of stainless steel, which has been determined to date from the period of 1300 BC. It indicates the advanced levels of technical development of the population of this locality in prehistory. The technology of making this item has not been discovered yet, so it gives rise to different stories. Legend has it that there was a lake under today's Hisar hill, but after the lake dried up, a hazel plant sprouted in that place. The settlement was named after that plant about 600 years ago. Legends about a water bull announcing accidents about giants are also connected to the nearby Vlasina Lake. Especially interesting is the legend of the army that, intoxicated with medicinal herbs, was late for the battle of Kosovo and cursed the village through which it passed, calling it Crna trava (Black Grass). Apart from suffering, mysteries and legends, the complex on Hisar is exceptional for its roots in the history of Leskovac and the context in which this city has developed from prehistory to the present day. That is why for the complete experience of this work of art, it is important to visit the city, get to know its people, speech and mentality.

The golden age of Leskovac, the period between the two world wars, is the time of legalized prostitution and cinema. Well, it wasn't golden because of that. „Serbian Manchester“, as it was called at that time, had numerous textile factories. There is a story that the industrial development of Leskovac began with the production of braids, a belt that tied chakshirs, which no one in Serbia produced. The enterprising people of Leskovac are founding numerous textile, chemical and food manufactories. The catering also worked great. There were three beautiful hotels. The most famous tavern was run by Dragi Bure (they nicknamed the man „barrel“ because his grandfather suddenly drank the whole barrel of beer for a bet), and his kebabs from "young buffalo" „jump“ from plates and glide down the throat with Hisar or Vlasotince wine or a soda splash.

One of the best museums in Serbia

Did you know that in the center of Leskovac there is one of the best museums in Serbia with a modernist building designed for this purpose? The National Museum in Leskovac is one of the rare cultural phenomena in Serbia. There are also numerous artifacts from the Hisar site, which testify to the way of life and economic activities during the Bronze and Iron Ages, as well as the Roman, Byzantine and medieval periods. In 2015, the Museum Society of Serbia declared this building the best museum in Serbia.

The monument to the legendary Toma Zdravković

The famous singer Toma Zdravković, who started his journey from "Danka"[1] to "Dno života"[2] in nearby Pečenjevac, got his bust on the central town square. Toma started his career as an underground singer, a man who best understood the soul of an abandoned and unhappy man ... His songs are still listened to today and alleviate pain with a good drop and a good snack.

There are two more busts on the central town square: the monument to the liberator in the wars of 1912-1918 and the monument to the national hero Kosta Stamenković. Inspired by the architecture of a Monastery Gracanica, back in 1931, the Cathedral Church in Leskovac was built. It depicts the power and self-confidence of the city at that time, which lived through its most powerful years of existence.

Symbol of resourcefulness and struggle for faith - Odžaklija Church

An interesting story about its origin has Odžaklija Church, which is located across the „Široka čaršija“ street. It was built during the time of the Ottoman dominance, the age of lies and deception. The Turks were informed that a house was being built for the priest and that therefore a large fireplace, a chimney, had to be built. Then a church was built around this fireplace. Hence the church bears this name (fireplace with a chimney is „odžak“ in local language, so the name is Odžaklija church). In order not to be higher than the minarets of many mosques, the church was buried. The name of the church remains today, as an illustration of resourcefulness, but also the desire to preserve the Orthodox religion and Serbian identity even in the most difficult times.

The city of gastronomy

Today, Leskovac is most often associated with barbecue, „mućkalica“[1], „sprža“ [2]and „ajvar“[3]. Gastronomic tourism is increasingly becoming the main asset of this city in the south of Serbia. Here, unlike other destinations where the gastronomic heritage is usually a supplement to the rich cultural and historical heritage, it could be the other way around. „Uštipci“[4], „ćevapčići“[5], „drob“ [6]and other specialties from the "grill" can actually be a lure to get acquainted with the interesting and branched history of this city, from prehistory to the twenty-first century, as well as to find interesting and somewhat forgotten gems, as in every case of the monument complex on the hill of Hisar, the unique and world-renowned architect Bogdan Bogdanović

Where to eat in Leskovac

You can try traditional cuisine, especially the famous „mućkalica“, in the Cap-cap restaurant in Niška Street, where there is also the Leskovac market. However, with each refurbishment and modernization of this cafe, the original Leskovac spirit is lost, and with higher prices, the traditional audience also changes.

You can also try traditional, but again adapted to modern trends food in the ethno-villages „Groš“ and „Apostolović“, where businessmen from the increasingly developing industrial zone of Leskovac meet.

Probably a very modern and interesting hotel and restaurant „ABC“ in the center of Leskovac is a consequence of the new industrialization, which we hope will again add the nickname of a European counterpart to this city. It doesn't have to be Manchester as it was earlier, but it can be a city within the EU.

[3] Serbian traditional dish made of different kinds of meat

[4] Serbian traditional dish made of pork

[8] Serbian traditional dish made of offal 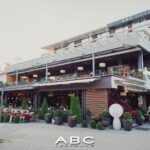 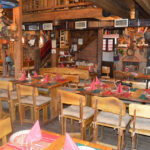 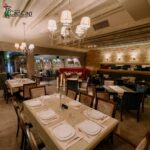 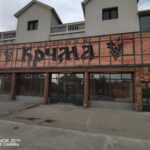 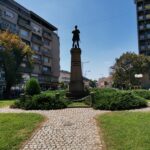 The other attractions
Location: Forest Goddess 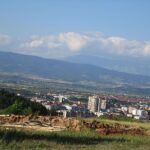 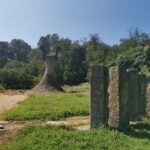 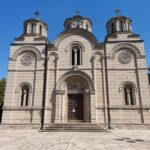 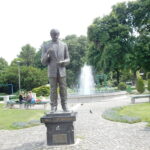 The monument to the legendary Toma Zdravković
Location: Forest Goddess 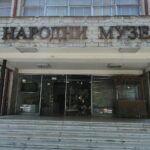 One of the best museums in Serbia
Location: Forest Goddess