Felix Romuliana was one of the largest and most magnificent buildings of the late antique world and could be compared in its significance and uniqueness with the most famous preserved medieval cathedrals and glorious modern castles.
Felix Romuliana, Gamzigrad, Serbia
Directions

Felix Romuliana was one of the largest and most magnificent buildings of the late antique world and could be compared in its significance and uniqueness with the most famous preserved medieval cathedrals and glorious modern castles. This archeological site, which is lucky in its name (Felix Romuliana) with imposing and outstanding remains of palaces and walls from late ancient times, over time, getting acquainted with the entire history of this site, leaves a strong impression of human transience, empires and religions that ruled the whole world, and then disappeared in a couple of decades.

The palace was built in the late 3rd and early 4th century AD, at the time of the tetrarchy, ie the quadrangle, a system according to which the Roman Empire was ruled by four emperors- two Augustus and two Caesars. One of them was the founder of Felix Romuliana, Gal Valerius Maximilian Galerius, the son of a barbarian who escaped persecution across the Danube and an ordinary Roman cattle breeder, which is why he was nicknamed Armenatarius (cattle breeder) all his life. He named this palace after his mother Romula, who he greatly appreciated. His lightning journey to the imperial heights, socially difficult to compare even with today's American dream, followed by many military victories, so that the famous Diocletian, who had no prejudices about his ethnic and plebeian origin, heard about him and highly appreciated his merits, married him with his daughter Valeria. Galerius had a brilliant military career, crowned with a victory over the Persians in 297. He began to build a magnificent palace in his hometown of Coastal Dacia. It is important to emphasize that as many as 16 Roman emperors were born on the territory of today's Serbia. He named the palace after his mother Romula - Romuliana, while the determinant Felix, which can be translated as happy, actually meant divine.

Galerius was an ambitious, handsome and controversial man. He loved life, good food, wine and fun. He remained faithful to his mother and stepfather Diocletian until the end of his life, and his role model was the god Dionysus, the god of wine, enjoyment and nature, whose depictions on mosaics and statues mark this locality. Galerius' way of exceptionally respecting Dionysus can also be understood as his idea to present his mother Romula, as well as himself, as gods. Just as Dionysus did for himself and his mother Semele, who joined the gods on Olympus after Dionysus' triumphant expedition to India. Galerius – the New Dionysus - after the triumph over the Persians, and his mother Romula, should be rised to the sky.

Although he wanted to declare himself and his mother Gods, Galeriuses relationship with God is better described by the proverb "man plans, and God laughs". Namely, he haven’t seen the finished palace and couldn’t enjoy it. Romula died first, and after that Galerius died in 313 in Sredica, today's Sofia. The people who buried his body claim that he died of an unknown disease. The temples to Jupiter and Zeus become the history of the Christian basilica, that is a faith that Galerius ruthlessly persecuted, and even, his enemies say, encouraged his stepfather Diocletian in persecution. However, towards the end of his life, he passed an edict on freedom of religion, much less known than Constantine's later Edict of Milan, which finally recognized Christianity's right to exist.

Gal Valerius Maximilian Galerius, built a palace fortified with a rampart with twenty defensive towers on an area of 6.5 hectares. Today, it is possible to visit the whole palace, which includes the remains of the sacral-memorial complex - two mausoleums and two monuments, Romula’s and Galeriuses. One kilometer away from this locality, it is possible to visit the ruins of the monumental tetrapylon on the Magura hill. Especially interesting are the tumuli on the hill of Magura, the last monuments of the Roman apotheosis, that is, the procedure by which the deceased members of the royal families were "promoted" to the gods by a special burial procedure.

For today’s appereance of the palace is responsable famous Serbian archaeologist Dragoslav Srejović. He started excavations in the early 1970s, believing that it was a much more important facility than a military camp. When the archivolt (the bridge connected by the two pillars) with the inscription Felix Romuliana was found in 1984, it was clear that it was an imperial palace, the size and significance of which was equal to the much better known Diocletian's in Split. Srejović did not live long, but his work did. The site has gained its tourist value, and all the efforts of Serbian archaeologists and especially the ones from Zaječar, security guards and museologists have been crowned with the status of UNESCO World Heritage Site, which Felix Romuliana received in 2007. In addition to mosaics, which are among the most beautiful from the time of late antiquity, works of art from Felix Romuliana can be seen in the Zaječar Museum. Here, 11 kilometers away from Felix Romuliana, is the head of Gal Valerius made of expensive and rare stone portfolios, as well as the famous mosaics Labyrinth and Dionysus.

Galeriuses' successor Constantine from Niš, abolished the tetrarchy and pagan apotheosis, the city slowly lost its significance, the invasions of the Avars and Huns took place. It was briefly restored by Justinian in the 6th century, but it never gained the significance and appearance that the Galleries had designed. Although archeological artifacts from prehistory to the Middle Ages have been found on the site and its surroundings, people finally left this place in the 11th century. Strange and bulky ruins remained near the village of Gamzigrad. However, in the 19th century, Baron Herder, searching for ores and describing the geological situation in Serbia, wrote about Gamzigrad, and after him, one of the best travel writers of that century, Felix Kanitz. This encouraged local intellectuals to take an interest in this place. It was assumed, due to the proximity of the Roman Empire's border on the Danube, that this were the remains of a large military camp such as the one along the Danube, presented in an interesting way today by Viminacium, when every tourist interested in ancient monuments should visit. 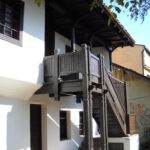 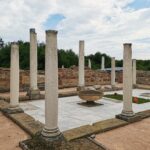 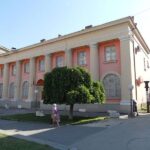 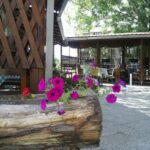 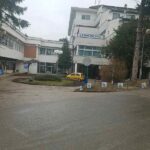