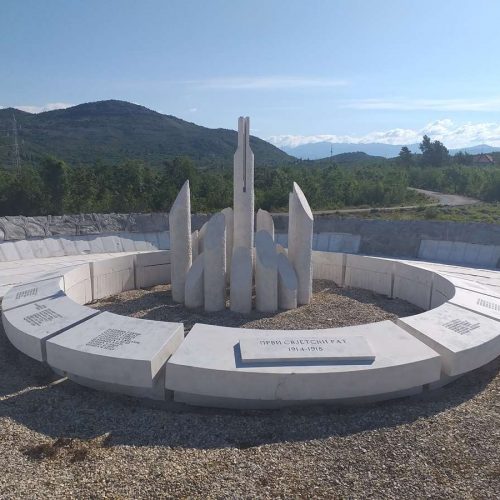 The monument on Barutana was ceremoniously opened in 1980, on the occasion of marking the 35th anniversary of the victory over fascism. The general social conditions in the post-war period were very favorable for the development of architecture in Yugoslavia. Also, monumental architecture was strongly represented, as an expression of general respect for the victims of the Second World War. Leaving behind a strong stamp of this time, architecture has confirmed itself as one of the most pronounced and oldest elements of identity. However, this monument differs from other monuments of the People's Liberation War because it is dedicated not only to those who died in World War II, but also to other wars that took place in the Balkans during the first half of the twentieth century where heroes participated - the First and Second Balkan War and the First World War.

The monument is the result of the extreme creativity of the architect. She shaped the space with it, giving an artistic dimension to the stone, which is synonymous for Montenegro and this region. The monument also carries a strong idea of brotherhood, which is in line with the author's understanding of what the monument should reflect. This indicates her perfect understanding of local values and their wider context that has been developed here, because in the conversation the locals themselves say that the monument has twinned them.

The locals gave their contribution to the construction of the monument in various ways - both with work and money. Thus, the war suffering of their family members, neighbors and friends united and fraternized the people of Lješanje with sorrow, and then with respect for the dead and with pride that they are their descendants. Furthermore, they were united by the construction, showing that by working together, there can be an imprint created that means immortal remembrance. It gave them a way to express their identity - the pursuit of lofty values ​​- freedom, dignity, trust and justice.